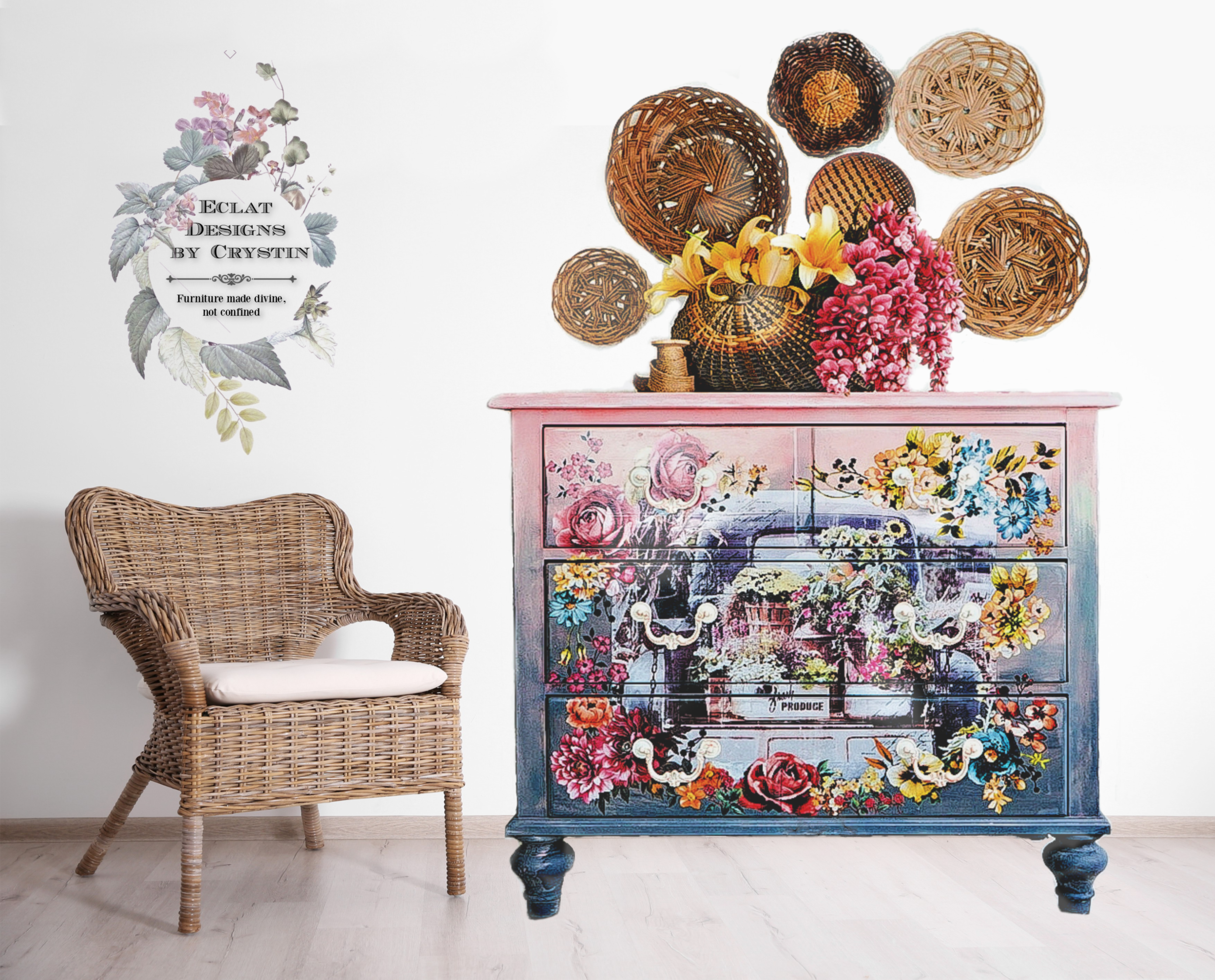 I’m calling this one my Floral Flamboyance Dresser. She was quite a challenge for me, to say the least because I drew so many blanks during the process of creating her. Inspiration doesn’t immediately come to me with every piece and with some pieces I have to grit my teeth and just persevere without knowing how it will look in the end.

It’s like a jig-saw as I fit the elements piece by piece and only know the full picture when I am done. This is a dresser I repainted because it never sold. It was originally white with some gold accents. I was going for a modern and luxe look at the time but it has stopped giving me joy now so I decided to give her another makeover.

In this case, I knew I was using redesign with prima’s new Spring release transfer called Fresh Flowers. It’s 24 in. x 34 in. and comes in three sheets.

Sometimes I create a piece with the materials in mind and at other times I allow the furniture to dictate how I go about designing it. I had some wild ideas as to the paint colors I would use. First I layered on Jolie Home paint in Zen. It’s a white hue with very subtle pink undertones. You don’t notice the pink until you have it against something stark white. I decided I wanted more pink tones so I chose Dixie Belle Apricot next. I then layered on some Dixie Belle Paint in Flamingo for a bit more brightness. I chose to put the fresh flower sign on the top of the dresser so I came up with the idea of adding some pattern underneath and chose redesign with prima 3d stencil Millicent Lace.

I used Jolie’s Zen for the stencil color and after I allowed the paint to dry, I added the transfer sign.

From there I drew a blank for a while as to how I would approach the body of the dresser. I’m not much of a farmhouse chic type of gal so the truck design threw me in a loop as to how to interpret it in a way that was a reflection of me. I decided to ombre the body in dixie belle apricot and fusion’s soapstone. I wanted the truck transfer to look like a painting on the dresser as if it naturally belonged there so the dark gray incorporated the color of the truck.

I applied the truck transfer after I was done layering paint. At this point, it looks a bit like just an image pasted on the front as the size of the transfer didn’t fit across the whole body. The blank space was dissonant with the flow of the design. Here is when I made the decision to take the words of the sign literally and go with a floral extravagance. I took some of redesign with prima’s ruby rose transfer and embellished it around the fresh flowers transfer.

I love it when a piece has details everywhere including the sides as I want it to give you pleasure when you look at it from all angles not just straightforward. Using redesign with prima’s 3d stencil, some spray adhesive and fiber paste, I created a raised stencil design.

Once the fiber paste has dried it is hard as concrete. I dabbed some accent colors on the stenciling for contrast. Using the same stencil but only the rose area of it, I added the roses on the top flanking the fresh flower sign. I found the perfect hardware for the dresser and voila, she is finally complete. It was a step by step process to achieve this design and I’m pleased with how it all came together. It’s fun, vivacious, and makes me happy just seeing it.

This site uses Akismet to reduce spam. Learn how your comment data is processed.